Still not working: is enough being done to stop blacklisting?

Laws to stop the secret blacklisting of trade unionists by employers came into force last year. Yet many who were victimised warn that they are still refused work. Peter Stanners reports. 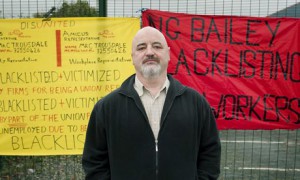 Colin Trousdale, a 52-year-old electrician from Crumpsall, sits across from me in the Koffee Pot. He is one of 3213 workers whose names appeared on an industry blacklist, exposed by the Information Commissioners Office in a 2009 raid on a small business in Worcestershire called the Consulting Association.

The man behind it, 68-year-old Ian Kerr, was fined £5000 under the Data Protection Act. Last year legislation came into effect making it illegal for organisations to refuse employment or provide a service to an individual as a result of appearing on a blacklist based upon their trade union activity.

But Colin’s not happy. Since the revelation of the blacklist in 2009 Colin has only managed to secure five months work through an agency. In his 36-year career, he has been out of work for 10, which he now believes was due to appearing on the blacklist as a result of his trade union and health and safety work.

“We fought for years and years to have this blacklist revealed. Two years down the line we’re still not working, it’s no different. The only difference is that now we know there’s a blacklist and we know we’re not paranoid. They were doing it to us then and they still are doing it to us,” he said.

The blacklist consisted of files on individuals working for the construction industry, detailing their trade union activity, employment conduct and other sensitive personal information. Compiled by Kerr with the help of employers the blacklist was used by businesses that paid £3000 a year and fixed sum per check for the service to vet potential employees. Over 40 companies have been named as having bought the information and invoices of up to £7,500 were discovered during the raid. For many, appearing on the blacklist meant an end to their career.

The legislation introduced last year, an amendment to the Employment Relations Act 1999, made it explicitly illegal for employers to carry on with the practice. Former Employment Relations Minister, Lord Young, spoke positively last March when it was passed, saying: “I am confident that this new piece of legislation will bring an end to the disreputable practice of blacklisting once and for all.”

But many, including Colin, believe the legislation has done little to stop firms from referring to blacklists when vetting employees.

“The same things go on. I apply for jobs I’m perfectly qualified for and I don’t get a response. I can send out 30 CVs a week and not even get a reply. They don’t even bother.

“Companies are thumbing their noses at the legislation because they know it’s about as much use as a chocolate fireguard,” he said. 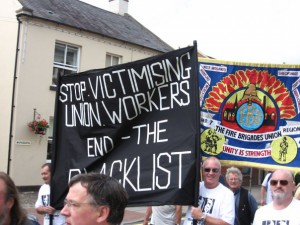 Professor Keith Ewing from King’s College London has been a critic of the legislation since its implementation. Speaking to the MULE, he said the regulations have several major problems.

Firstly, while it may be unlawful for businesses to use or supply blacklists of individuals active in trade unions, workers still do not have a right not to be blacklisted.

“Being blacklisted should in itself be recognised as wrongful and as a violation of the human rights of the workers concerned [should give] rise to punitive compensation,” he said.

Secondly, no provisions were made to compensate the thousands of workers appearing on the Kerr’s database.

Colin is aware that his work as shop steward and health and safety representative on sites affected the profit margins of the contractors he worked for.

He said: “I was costing companies thousands and impacting on the profits. They would say to the client these are the risks that are involved and this is the safety equipment we will provide in order to negate those risks. But then to maximise profits they will circumvent the risk assessments and not provide the safety equipment.

“So then I’ll come along as safety officer and say, I’m reading your risk assessment, you said you’ll provide this, where is it? We’re not doing that job until you provide that.’ So that then is impacting on their profits because they had to go out and buy all the safety equipment that they costed for in the first place.

“If companies weren’t cutting corners to maximise output it could be a much safer industry. It might take a week longer, but nobody’s going to die. How can you put a price on life?” 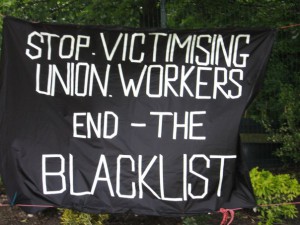 With construction one of Britain’s most dangerous industries, claiming 42 lives in 2009/2010, the need to enforce health and safety requirements on site seems self-evident.

Professor Ewing agrees, saying: “If we take safety seriously, as a society we should come down hard on those who try to undermine efforts by workers to maintain safety standards.”

The exposure of the blacklist resulted in action being taken by workers against many firms. Speaking after the successful case brought by Phil Willis against CB&I last November in Ashford, Unite pledged to continue fighting cases of blacklisting among its members.

Tom Hardacre, Unite’s national officer for construction, said: “Unite intends to use the full force of the law to hold firms to account for systematically ruining people’s livelihoods just because a few brave men were prepared to stand up for the rights of their fellow work colleagues.”

Toughening the blacklisting laws were also a priority to Unite. Les Bayliss, Unite assistant general secretary, said: “This is a significant milestone but we believe the law should go further. Unite will be campaigning to strengthen the law on blacklisting to ensure employers do not even contemplate blacklisting trade union members.”

Through the Blacklist Support Group, Colin vows to continue campaigning to rid the industry of blacklisting though he is aware he is unlikely to succeed.

“At the risk of sounding pessimistic I don’t think we will ever resolve it properly.

“But I’m not going to stop either until I get justice. If it means I won’t ever get work again then so be it. But if I can make it better for those kids coming behind me then I’ve done something.

“Like everybody I go to work to pay the mortgage and put food on the table. I don’t go to work to come home in a body bag. And I don’t see what’s so wrong with that.”