A presentation by arms manufacturer BAE Systems at the University of Manchester was abandoned yesterday following protests by staff and students angry at the company’s presence on campus. 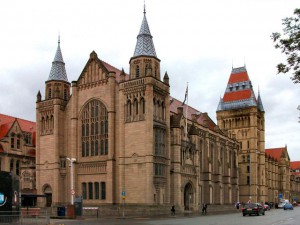 Representatives of BAE were invited by the Mathematics Department to take part in an “industrial maths workshop” yesterday morning, intended to provide students with “experience in engaging with industry”. An email sent around the department also noted that another intention of the day was for the arms dealer “to fund a (sic) MSc project in which the supervisor will receive £500 to his/he r research budget”.

A member of staff informed the Campaign Against Arms Trade (CAAT), who in turn contacted students at the University. Protesters first handed out leaflets criticising BAE and their presence on the campus, before blocking the entrances of the intended seminar room by lying down with placards with information about the arms trade shaped like tombstones. After several attempts to switch rooms for the meeting, the seminar was called off and BAE staff left the city.

BAE has been heavily criticised in recent years, with accusations of bribery and corruption from groups such as the Serious Fraud Office. They also supply arms to several dictatorships, including some currently involved in repressing protest throughout the Middle East. They recently described their biggest customer, Saudi Arabia, as an area of “increasing opportunities” because of “regional tensions”.

Abi Haque, of CAAT’s Universities Network, told Mule: “Campaign Against Arms Trade believes that the involvement of education with the arms industry raises serious ethical questions about the role and purpose of university education.

“It is disturbing that universities are so closely involved with arms companies like BAE Systems, who export weapons indiscriminately worldwide, including to human rights abusers such as Bahrain, Libya and Saudi Arabia, and who have been investigated for corruption in many countries.”

The University of Manchester has extensive financial and research links with the arms industry. Between 2001-2006, £15,812,903 was received by the University for arms company research. More recent figures are unavailable because CAAT’s Freedom of Information requests were refused. Yesterday’s seminar followed a successful workshop in January, after which arms company Thales funded a PhD in probability theory.

The University has also been a partner organisation in the BAE-led FLAVIIR programme, which researches the future development of unmanned air vehicles, commonly referred to as drones. Drones have been controversially used in Afghanistan and Pakistan, with several British police forces interested in their future implementation.

Amanda Walters, the University of Manchester Student Union’s Campaigns Officer, said: “We protested because we do not believe that the University should do research or take money from BAE Systems. This is because BAE Systems is the largest arms company in the world and it sells arms to countries with poor human rights records. They have also faced legal proceedings for corruption and bribery.

Furthermore, by aiding BAE Systems our large Bahraini community on campus have seen their families and friends persecuted back home with products that our University have helped to make.”

Several Bahraini students in Manchester recently had their scholarships stripped by their government after spies spotted them protesting in the city.

Links to the arms trade are commonplace amongst the UK’s universities. York, Newcastle, UCL and Southampton have all been shown to have extensive links, while CAAT’s Study War no More report identified at least 26 institutions in total involved in research and investment with arms companies. This is likely an underestimate, said Haque: “it is highly possible that there are a lot more universities involved with BAE or the arms trade.” BAE has also begun working in schools, including using LEGO to encourage children to develop the skills it needs to develop weapons.

In a statement, the University told Mule: “BAE were invited onto the campus to make a presentation during a one-day Maths & Industry workshop. The University of Manchester has a long history of constructive engagement with industry.

“Leading research-intensive universities such as Manchester have a responsibility, to engage with leading commercial organisations to address together the most pressing societal issues, and to enhance the employment prospects of our students.”