Mancunians who are more reluctant to welcome the Tories to the city centre than the council may well be interested in what they’ve been getting up to since they swarmed out of Piccadilly on Sunday. From the looks of it, they’re hardly likely to have endeared themselves to anyone. 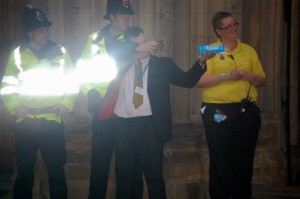 A fair cop? A Tory delegate pretends to shoot demonstrators

On Sunday, senior PCS unionists travelling on the train from Euston for the protest couldn’t buy a packet of Mini Cheddars because Tories had soaked up all the buffet’s change by paying for everything in £50 notes. Then again, at least they’d bothered to pay for things. On Monday it was alleged that Tory delegates (no doubt inspired by August’s looting) had been wandering into the restaurants of hotels in which they weren’t booked to stay, running up enormous tabs on food and drink, and then scarpering without paying.

It is common practice in the service industry for staff waiting tables to pay for customers who run out on a bill, and initial reports claimed that one waitress ended up paying £80 after a group of posh winos legged it. This was later denied by the hotel in question, the Radisson Edwardian, who also denied that staff are forced to pay the “deficit on bills”, although it would not be the first time that Tories have forced workers to pay off a deficit.

A photograph was also sent to MULE and Salford Star showing a Tory miming opening fire on protestors in Albert Square as police and security staff watch. The Tory in question was presumably treated differently than the Wythenshawe lad who made a gun sign behind David Cameron in 2007, and who was subsequently hounded by the media and later the police (and who, rumour has it, was paid £20 by a journalist to do the stunt). The moral of the story: if you’re going to make a gun sign make sure it’s a shotgun, not a handgun, and that you’re the sort who has the appropriate tweed jacket and plus fours in a cupboard at home rather than a hoodie and stash of weed.

The Tory in question may not have been genuinely intent on causing violence, but in that case is he any different from the two young men jailed for swearing during the riots? The answer is most likely the fact that he has a steady job and good career prospects, since he’s not just finished an asinine prison sentence.

Inside the conference is little better. The “Freedom Zone” in the Bridgewater Hall has some questionable taste in toilet reading: 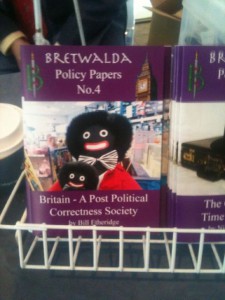 This pamphlet was authored by Bill Etheridge, a man earlier kicked out of the Tories along with his wife for publishing photographs of themselves playing with Gollywogs. The “anti-PC” campaigners claimed that this proved their point about political correctness, although it rather more proved the point that they are racist tossers. Their publisher“Bretwalda”, who have a stall at the Bridgewater Hall, have also published books by the more crack-brained (more than usual, that is) members of the Tory Party, including a pamphlet  endorsed by“straight talking” MEP Roger Helmer that likens wind turbines to rape. Helmer, incidentally, believes that rape survivors share “a part of the responsibility” (whether the country is therefore to blame for being raped by wind turbines he does not state), and that homophobia does not exist and is “merely a propaganda device”.

From the lowest to the highest, the Tories seem a rather uncivilised bunch: even the Prime Minister and Chancellor of the Exchequer have been witnessed running out on a bill and leaving it with hapless spin doctor Steve “Big Society” Hilton, who may now perhaps know how the public really feels about forking money over to multi-millionaires.

Have you sighted one of our charming, ruddy-faced and liquored up Tory guests doing something they’d rather the electorate didn’t hear about? Let us know! editor@manchesterMULE.com