Two sent to jail for swearing

Manchester Magistrates Court has so far sentenced two men to prison terms after they were arrested and convicted of swearing during the disturbances in the city on Tuesday night. 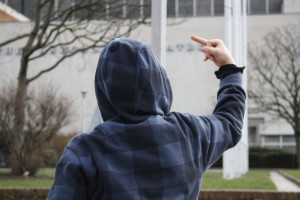 The sentencing came as part of the “fast track” court procedures that have taken place across the country since the rioting at the beginning of the week. Magistrates Courts hear cases for minor offences, such as public order offences, and those in cities affected by the riots have been working uninterrupted to deal with the backlog. More serious offences are handed on to Crown Courts.

Gemmell pleaded guilty to telling officers during the riot: “I’d smash you if you took your uniform off” before being pinned to the ground and arrested. The call centre worker, who applied to join the army earlier in the year, maintained that he was only in the city centre to visit his girlfriend.

His mother, who was made redundant earlier this year from a job with the council, told reporters: “You do have a bit of trouble with gangs. He has never been involved with any of it. I’ve had a copper say to me, he’s so chuffed that my lads have never been in trouble. He’s not ‘known by the police’ whatsoever.

“He hasn’t hit anyone. He hasn’t robbed anything. He was verbally abusive. He knows – you run your mouth, there’s a consequence. But the consequence they gave him, it’s disgusting.”

Analysis in the Guardian of a partial list of those appearing in Magistrates Courts across the country has shown that 60% of them are being held on remand. Last year, the figure was only 3.5%. Very few were granted bail or given fines, even when they had pleaded guilty to minor offences. A magistrate has noted that if the non-granting of bail is being used as an early form of punishment, then “it is not only wrong, but illegal”.

Elsewhere, a Londoner who pleaded guilty to taking a bottle of water worth £3.50 “because he was thirsty” while walking past a looted shop on his way home from his girlfriend’s house has been sentenced to the maximum six months in jail. By comparison, Jim Divine, the former MP sentenced to eighteen months for fraudulently claiming £8,000 during the expenses scandal was released after serving four months.