Voices of the Manchester Strike

Thousands marched through the streets of Manchester today in support of public sector strikes called against proposed pension reforms and in opposition to the government’s austerity drive. Trade unionists in the city took part in industrial action involving hundreds of thousands of workers nationwide. 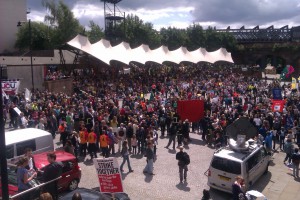 Members of the National Union of Teachers (NUT) and the Association of Teachers and Lecturers (ATL) took part in strikes and pickets outside schools with the BBC reporting 550 schools closed in Greater Manchester. The University and College Union (UCU) also staged walkouts, while civil servants from the Public and Commercial Services Union (PCS)  took part in strikes across the city.

Several thousand unionists and their supporters marched from All Saints Park for a rally in Castlefields where union leaders gave speeches, outlining the case against the proposed pension reforms laid out in the Hutton Report. It was clear however from those on the street that today’s actions were about more than pensions.

An attack on education and public services

Students and UCU members from the University of Manchester and the University of Salford – who were not on strike today – also came to support the picket. MMUnion president Rob Croll expressed his disappointment with the university for not backing its staff and “trying to intimidate those who are picketing outside buildings”. 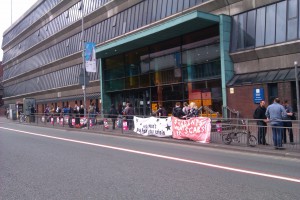 “At the end of the day,” he said, “these are the people who are providing a service to society, to our generation and future generations. Cutting pensions shows they don’t respect these individuals. If we’ve got the highest levels of elderly poverty of 27 member states of the EU yet we’re the fifth richest economy in the world it doesn’t add up.

“It’s another attack on higher education,” he went on, “Students are being charged higher fees, teachers are getting their pensions cut – what does it mean for students going to university? And when they leave if they to get a job in the public sector and might not even get the pension?”

Members of UCU were also on strike at The Manchester College (TMC), with pickets on campuses at Northernden, Openshaw, Shena Simon, Moston and St John’s Centre. A spokesperson commented, “It’s about protecting the future as well isn’t it? Because standards of education are going to fall if these reforms go through.”

One PCS striker from the Equality and Human Rights Commission in Manchester said, “It’s not just about pensions though. It’s about services. The cuts the government are planning in regards to the services we provide and use are going to decimate public services and that’s why we’re out today, and that’s why we’ll keep coming out until we change the path of this government.”

Teachers out in force 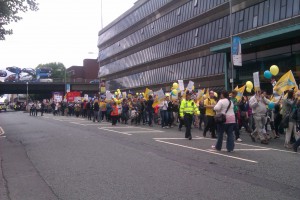 Much of the march was made up of members of the NUT and ATL, with many on strike for the first time in their lives. Jason Sharp, regional official for ATL, said, “The majority of people join ATL because they don’t want to take strike action ever. This is the first time in our history that we have ever taken strike action and it’s because the government are lying. If they would give us the figures and show that there is a need to pay more money then we’ll pay it. But they’re refusing to – and it’s about a tax on teachers in addition to what they’re already paying. Why should teachers have to pay for the mistakes of the bankers?”

Chris Everitt, a member of the NUT and a teacher at Stretford High School, said, “Essentially what the coalition are trying to do is to privatise as many public services as they can. Part of the fight for public pensions – while it is important in itself – is about defending public services more generally, because if they can bring down the pensions provision, it will be easier to privatise.

“This is why the CBI is supporting reduction of pensions in the public sector, because there will be less liabilities for them to take over. Also, if you reduce pensions, you’ll get a lower calibre of graduate going into the teaching profession. It will make education worse in the long run, and that’s bad for everyone in our society.”

“It is about pensions, but more than anything it’s about the future – our children and grandchildren. We want to ensure that they have a decent future and an entitlement to a decent standard of education, so it’s not just about pensions it’s about everybody else,” said one member of Salford NUT.

Reports from picket lines were overwhelmingly positive. One teacher from TMC described the pickets as “very lively” and getting “lots of support”.

“We had eight members of the NUT on the picket line [at Stretford High],” said Everitt, “but at different times different people were coming out from the school and joining us there. So at one point we had about 30 people there, and it was a really good atmosphere and people were solidly behind it. I think people are just looking for the other unions to join in. So really we need Unison, we need Unite, and we need GMB to be striking in the autumn.” 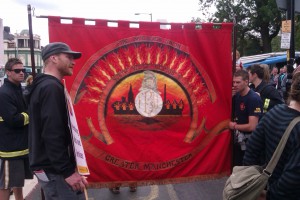 The march included hundreds from non-striking unions as well, including many from Unison and Unite. A strong contingent of 200 members of the Fire Brigades Union (FBU) attended the demonstration. Paul Fogerty, Brigade Secretary at Greater Manchester Fire Service, explained why he and his colleagues were out to show solidarity: “This is an attack on all public sector workers, unions and our pensions. These pensions are deferred wages that we entered into in good faith believing that if we paid in a certain amount that at the end of the term we would be entitled to, not a huge pension, but a fair pension.

“We don’t believe the government who are saying they are not affordable now. Changes were made to a lot of the pension schemes four or five years ago. So let the government put up the figures first and foremost and then we can negotiate properly.”

Asked whether he could foresee the FBU going on strike themselves, Fogerty said, “Hopefully not, but if pushed members of the Fire Brigades Union will not flinch and we will take industrial action, but only as a last resort, because we don’t take it lightly.”

“I would have to be on strike for two and a half years to lose what I’m about to lose,” said Vié, “So if that’s what it’s going to take that’s what it’s going to take. I’m prepared to lose quite a lot to save our jobs and our pensions. We started this job and paid into our pension with a promise of what we would get – which isn’t much in any case – and they want to slash it by at least a third. I can’t face working till I’m 67. If I survive till then I’ll have to choose between heating and food, and I’m not the only one like this. We the workers – the majority – are just being hit on the head again and again. Well that’s it – enough is enough. As far as I’m concerned what we need is a general strike. We need to become Greek – to show this government that it’s them or us.”