Want to get involved with J30?

Union members and protestors across the city are preparing for a day of strikes this Thursday, as across the nation 750,000 teachers, lecturers and civil servants walk out in protest over proposed pension reforms and the government’s austerity agenda. Want to know what’s going on in Manchester? Then read on… 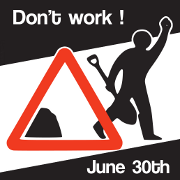 University lecturers at Manchester Metropolitan University and the Manchester college will join 10,000 teachers from 500 schools and 8,500 civil servants at the pickets from 8:00am. Even if you can’t make the whole day, they will welcome verbal and material support.

At 10:30am Chris Grayling, the Minister for Employment, will begin speaking at the Welfare to Work conference at the Manchester Central Convention Centre (G-Mex), where opponents of welfare reform proposals will protest.

At 11:00am an NUT demo will begin assembling at All Saints Park, Oxford Road, before heading in to Castlefields at 11:30am.

The following are the pickets set up around the city. Visit them if you want to show support:

Know of a picket or protest we missed, or have more up to date information? Then email editor@themule.info and let us know!