Young people and youth workers have reacted with anger and disbelief following the city council’s decision to close down its entire Youth Service – the only local authority in the country to do so. Meanwhile workers have been barred from speaking about the closure, including to the young people who use the services. 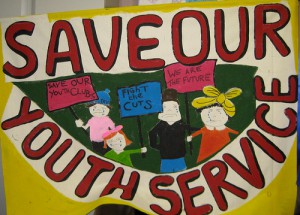 When school student Lewis Braithwaite was shot dead out side a chip shop outside Withington in 2008, local youth workers helped set up a project to involve young people in order to draw them away from the ‘gangs, guns and knife crime’ culture present in areas of the city.

Yet overnight the Home Office have cut the Youth Crime Action Plan funding granted to the Unity Arts Project which operates out of the Old Moat Young People’s Centre. Workers at the centre say this was done with no warning or explanation.

“Its absolutely disgusting, they only care about themselves. They are not looking at the big picture. It will damage the future of young people in this City,” explained one youth volunteer who has been involved with the Unity Festival, a long-standing multicultural, anti racist music and arts project that operates from the Old Moat Center. “I used to go to the adventure playground in Moss Side,” he said, “but now they have pulled the funding to that as well.”

Now Manchester City Council has decided to disband the entire Youth Service as part of its effort to cuts its budget by over a quarter for the next financial year. The proposal was rubber-stamped in the fiery full council meeting last week with no councillors raising concerns. Over 300 youth workers have learnt that their posts have been made redundant by the city council, led by Sir Richard Leese, who was himself once a youth worker at Abraham Moss in North Manchester. In neighbouring Newton Heath over 100 young people regularly attend the youth centre but it is now due to close.

According to an educational report into Key Stage 4 attendence Youth Service-based Pupil Referral Units (PRUs), which offer education for young people who have been excluded from mainstream schools, achieve higher levels of attendance than other PRUs. Although workers have been told that their posts will remain until July – allowing pupils to sit their exams – it is unclear where such young people will be able to access education next academic year. 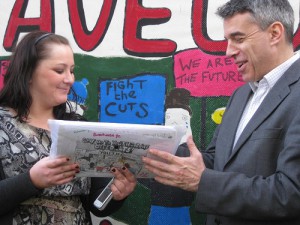 Youth workers have been threatened with disciplinary action if they speak out about the Youth Club closures.

One who didn’t wish to be named, said: “Some people think that when you say ‘youth services’ it just means playing pool and football. But we provide vital services, such as helping excluded pupils gain their GCSEs. What will happen to them now?”

They have even been banned from speaking to young people about the future of the service.

“The first many young people will know of their centres closing will be when they turn up and there is a closure notice on the door,” said Collette Crosdale, Trustee of Old Moat Outreach Project. “Youth workers have been gagged and are not even allowed to tell the young people they work with about the closures. Even Tory Councils are not doing this!”

Jill Lovelock,  who has worked with young people on arts projects in Manchester for decades spoke of the injustice of the abolition of the service: “It was the Youth Service management who were damned in the recent OFSTED report, while those who do the face to face youth work were praised.”

In just over a week over 2,000 names were collected on petitions asking for the service to be saved. They were presented to local Labour Cllrs Jeff Smith and Andrew Fender, who are both on the management committee of the Old Moat Youth Centre that is now set to close. Manchester City Council were contacted by MULE for comments on the issue but declined to respond.

“We all remember that in 1981 desperate and angry young people rioted in Manchester,” said a spokesperson from Manchester Coalition Against the Cuts. “Young people from across the city will be welcomed on the march in London on the 26th. Our aim is to build a movement strong enough to reverse these unnecessary closures,” he said.