Manchester Metropolitan University (MMU) is planning a new development on green space in Hulme. They label the construction the “greenest campus in the UK” and say plans will balance the needs of the local community, but Hulme residents have their doubts. 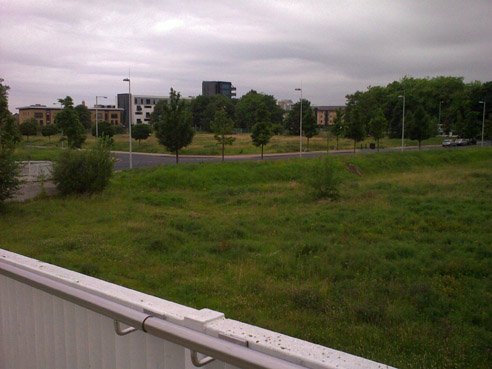 MMU state that “environmental sustainability is integral to all design” and maintain that the £120-million development on Hulme’s Birley Fields will incorporate technologies to minimise carbon use, save energy and cut waste. Buildings will use ground-source heating and solar energy while maximising natural lighting. And a Green Travel Plan will focus on reducing car use, increasing use of public transport and prioritising pedestrian and cycle usage.

However, the plans have met a raft of criticism from local residents and environmental campaigners alike.

The promise of jobs for local people has been soured by the fact that the new campus will consolidate existing campuses in Didsbury and Oxford Road, from where most jobs will be transferred.

There are also concerns regarding car parking. The provision of an additional 400 spaces seems at odds with green transport plans and the diversion of traffic from Bonsall Street will likely mean more traffic on the already congested Stretford Road.

Amid criticism over the plans has come the revelation that the Council gave the land to MMU for free, justified “on the basis of the economic and regeneration benefits of the development”. MMU estimate that the campus will inject £29 million into the local economy annually, but this has failed to allay concerns that Hulme will turn into another Fallowfield, where the high student population has led to exclusion for local residents. News that half of the buildings are to be residential halls have only fuelled this fear.

“The first meeting 18 months ago was an invite-only for local businesses. A lot has clearly been going on behind the scenes with the Council for some time. Congestion will be a nightmare in an area where air quality is already poor,” said local resident Dave Sage.

In 2006 a Permaculture design course was held in Hulme which proposed a practical, community-based garden on the green space. Yet the two concrete designs put forward have been largely ignored. On offer instead is Hulme Square, an “extensive green area linked to surrounding areas of trees and grassland”.

In response MMU said that many meetings have been organised to inform local residents of the plans and told MULE that 72 per cent of residents responded positively to the development during the consultation process. They are now planning are to hold an environmental sustainability workshop involving members of the local community with a specific interest in ‘green’ issues as part of the consultation programme. They say that this will inform the development plan going forward. Building is due to start next year. 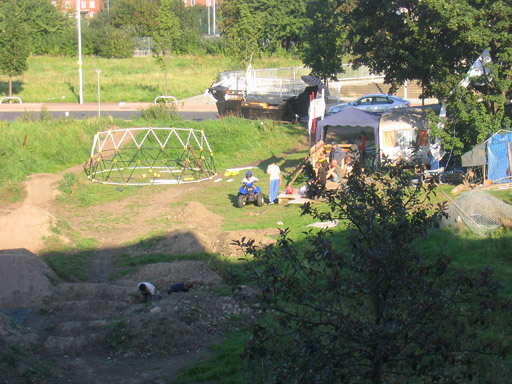 It is ironic that while MMU is planning to build a new medical campus on Birley Fields they are undermining the health and wellbeing of the local community. As a local resident I don’t want to see the facility built, and believe the land can benefit the local community and the economy more as a green, open space. In Manchester we face serious health inequalities, and there is increasing scientific evidence, and government policy in the pipeline supporting the retention of natural spaces on the basis of health and wellbeing.

Almost one in four adults is obese, and by 2050 this figure could rise to nine in ten. Along with poor diet, lack of physical activity is the major cause of obesity, and only 40 per cent of men and 28 per cent of women attain the government’s target for physical activity. The cost of inactivity in England is estimated at around £8.2 billion a year. Mental health is another huge issue, and is particularly acute in inner city areas like Hulme.

Government mental health official Jude Stansfield advises that “the protection and reclamation of public space”, and “schemes to open up land for community cultivation”, are examples of good practice in public health. Put simply, by increasing access to open space, and opportunities for physical activity there could be improvements in public health and savings for the NHS. Research by Dr Sjerp de Fries has shown that increasing green space reduced health complaints. In addition Frances Kuo has evidenced that green space in inner city areas reduces residents’ mental fatigue and the psychological impacts of stressful life events. Consequently the Zion Health Centre in Hulme has a therapeutic garden which provides a resource for people with mental health issues.

Since 2005 public health has been empowering communities to have a say in how health and well-being services are delivered in their area. Around then Friends of Birley Fields conducted a residents’ survey which indicated many in Hulme would prefer green and social initiatives on the site. Despite the fact that MMU are building a ‘green’ campus, I do not believe it will be socially or economically sustainable, and it is not being built for the benefit of the people that live in the area.

You can join the Facebook group Our Hulme here