Nearly fifty demonstrators took part in the Manchester leg of a national week of action against the coalition’s changes to incapacity benefit on Wednesday. 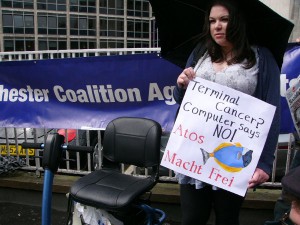 As part of the action, disability activists, anti-cuts campaigners and trade unionists turned out to protest outside the Disability Benefit Centre on Bridge Street.

At the heart of the fight was a protest against Atos Origin, the company behind a £300m government investment to carry out ‘work capability assessments’ on those claiming incapacity benefits.

But demonstrators argue that the real purpose of the assessment, which started in October 2010, is to strip people of their benefits in a bid to force them back to work.

“As an unemployed person I can see that this is part of a much wider attack. It’s a plan by the Tories to scapegoat benefit claimants and people at the bottom of society while the bankers and bosses and all the rest get away with it,” said Paris Thompson, one of the event’s organisers.

Protesters say that the unfair testing system used by Atos, which involves ticking a series of boxes, is inaccurate and unfair and is designed to test what people can do rather than what they can’t. It has already led to people with terminal illnesses and severe medical conditions to be declared fit for work and many people have already had their benefits cut.

Tom Stocker, a 22-year-old student, explained, “I can’t work, it’s not an option. I get disability living allowance because I have a nervous condition called Complex Regional Pain Syndrome where I get pain in my peripheral nerves, it can be quite debilitating.

“Atos have very fixed boxes that they judge people on and a lot of rare conditions like pain conditions, chronic conditions and long term problems that are debilitating, don’t necessarily mean that you can’t switch from one chair to another, which is one of the criteria they use to assess you.” 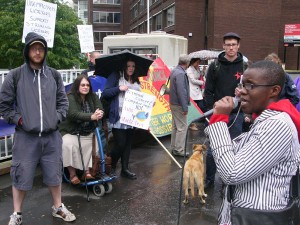 Sharon Hooley, 37, worked in Customer Services before becoming too ill to continue, “Basically I am really scared about being forced back into work. Once I’ve got my date for my final assessment I have to come to the Disability Centre to get incapacity and I’ve got to be assessed by these guys. What’s scaring me is that if they’ve got me on a good day, I can speak for Great Britain whereas most of the time, I’m in a lot of pain. We end up being numbers not people. I am really proud to be here with everyone on this protest.”

A spokesperson for the Department for Work and Pensions said, “Any medical evidence provided by an individual during their assessment is taken into account when making a decision, and if that person disagrees with their decision, they can appeal to an independent tribunal.

Ph0tos by Danny Lynch. For more information on the protests see the Benefit Claimants Fightback website. For other articles on the Welfare Reform Bill see our previous pieces here, here and here.