The not-so-rosy future of East Manchester and regeneration

The New East Manchester (NEM) urban regeneration company was set up in 1999 as a partnership between Manchester City Council, the Northwest Regional Development Agency (NWDA) and the Homes and Communities Agency (HCA). It has since been responsible for one of the largest regeneration schemes in the country, covering nearly 2,000 hectares of land to the east of the city centre.

However, times are changing. Both NWDA, which is winding up after the coalition government decided to abolish the regional development agencies, and HCA (itself expected to cut its workforce by a third) have now officially withdrawn as shareholders. These agencies traditionally acted as the conduits through which public investment funnelled into NEM projects, but now the council is left as the only controlling interest.

The city council’s proposed Revenue Budget for the next financial year passed on 9 March – and which came into effect today – indicates the local authority is preparing to shell out £1.2m per year from the Capital Fund to cover the shortfall caused by the withdrawal of NWDA and HCA, and the loss of Housing Market Renewal funding from central government. It was announced two weeks ago that NEM’s two deputy chief executives and the director of neighbourhoods would be going, while chief executive Eddie Smith would be leaving on secondment to work full-time for the Eastlands partnership.

The chair of NEM Simon Bate says he remains optimistic, arguing that the company “has successfully laid strong foundations over the past decade,” as it looks towards “working closely with the City Council and other public bodies, local communities and the private sector to encourage development and unlock investment.”

A NEM spokesperson said there would be “no dramatic changes” to the operation of the company. But public funds for large-scale regeneration are severely contracting. NEM, perhaps with help from the new Local Enterprise Partnership, is likely to have to apply for funds from the £1.4bn Regional Growth Fund, which must cover the whole country for the next three years. Put in perspective, NWDA’s budget was £1bn for the region for the same time period.

An end to gap funding

Since the Thatcher government’s attack on local authorities’ political and economic power in the eighties, the council has increasingly had to rely heavily on attracting highly mobile financial capital for urban development. Hence NEM’s long-term strategy to “unlock investment”, which has been pursued in large part through the ‘public-private partnership’ model of channelling public money into regeneration schemes undertaken by private developers.

In effect this meant the public assuming the financial risk and creating the best possible conditions for private developers and investors, who take home the profit. It has also seen property owners and developers become thoroughly embedded in the increasingly centralised governing of the city. It’s an approach to growth the council has embraced like few other local authorities, particularly under Chief Executive Sir Howard Bernstein.

Speaking at MIPIM – the world’s largest property fair – in early March, Bernstein urged developers to bring their plans forward in readiness for the second round of bidding for the fund. He also proclaimed the era of ‘gap funding’ – basically grants – which developers have relied upon for so long in regeneration, to be over.

The coalition’s obsession with reducing the deficit and government spending mean direct public investment in infrastructure and regeneration is unlikely anytime soon. No wonder then UK Regeneration CEO Jackie Sadek’s declaration at MIPIM that her new company’s “mission is to privatise regeneration.”

The big funding talk at MIPIM among the Manchester delegation appears to have been the Evergreen Fund. The potential £500m Evergreen Fund was conceived in 2010 and recently became active, through which investors and lenders could offer loans or buy equity specifically in viable commercial projects.

At present it has £30m from the European Regional Development Fund in the form of ‘mezzanine debt’ and expects match-funding from other public institutions and private lenders, with a large bank supposedly ready to offer up to £300m as ‘senior debt’ on a case-by-case basis. In plain English, this means that the public would be last to be paid back if things go wrong. The banks – Barclays in this case – will naturally come first.

Times ahead are likely to be tough, but even during the good times the much-lauded regeneration of East Manchester never lived up to the hype of galvanising growth and job-creation in one of the city’s most deprived areas. A report published by Save the Children in February found that 27 per cent of children in Manchester to be living in “severe poverty” – the worst record of any local authority in the country.

According to the consultative regeneration framework document for the massive Eastlands redevelopment, the regeneration of East Manchester has created 3,000 jobs in the last 10 years – a figure which seems depressingly low considering the council is set to axe at least 2,000 staff in one fell swoop as it tries to reduce its own expenditure by £109m in the new financial year.

Despite pockets of success, employment prospects for some of the UK’s most deprived communities moved little beyond poorly paid ‘flexible’ jobs, servicing the consumption habits of middle class residents and tourists – working in restaurants, entertainment and cultural venues, and so on.

NEM were “not able to provide a detailed breakdown of the kinds of jobs and where the people recruited came from.” A spokesperson did however tell MULE that around half the hundreds of new jobs at supermarkets such as Asda, Tesco and Morrisons, and at Next Retail, went to local residents.

Inside the Sharp Project in East Manchester

The most recently celebrated project in East Manchester was Phase Three of the Sharp Project – a £16.5m ‘digital media production complex’, which is apparently “seen as a ‘growbag’ environment that will supply the digital labour market with talent.”

According to the Eastlands document 5,000 extra homes have been built in East Manchester over the same time period. Elsewhere, however, the Manchester-Salford Housing Market Renewal Pathfinder, which also covers much of East Manchester, spent more money demolishing homes than building them between 2008 and 2009. The £600m scheme, now prematurely halted, bulldozed 2,200 more houses than it built over its lifetime, leaving a wasteland in its wake.

The ‘Housing League Table’ produced by homeless charity Shelter in 2010 found that only 13 per cent of new housing stock being built in Manchester was ‘affordable’ – an average of 317 per year across the city. This is well below even the council’s target of 20 per cent as a starting point for new developments in a city with over 23,000 on council and housing association waiting lists last year, a figure which is only likely to rise.

The proclaimed goal of producing ‘mixed communities’ was never likely to be the priority of those private investors desperately sought to finance a property boom that was the only game in town. Expensive flats with high profit-margins always came first regardless of limited demand, while commitments to affordable and social housing were continually sidelined, and those council houses not flattened down or sold fell into disrepair. 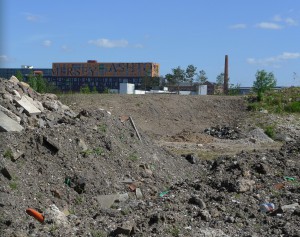 The Wastes of New Islington

The financial crisis – tightly bound up in this unstable housing market – and recession led to stagnation and decline in the property market while several schemes collapsed as investors and developers went bankrupt.

A series of hefty bailouts in the dying days of Labour which tried to ‘kickstart’ stalled developments have had a limited impact. Lowry Homes for instance, the developer of the Maine Place which was given £9.4m by HCA last year to continue its work in Moss Side, went bust in November. Other developers sit on their hands waiting for house prices to start rising again. For the moment at least, that doesn’t seem likely anytime soon.

Housing minister Grant Shapps’ new ‘Build Now, Pay Later’ scheme, in which developers won’t have to pay for land until they’ve started work, appears to be the latest risky throw of the dice in a stubborn sector where housebuilding start-ups remain at their lowest peacetime levels since 1924.

Commercial property is the future

It may seem positive that developers are likely to be given loans rather than effectively lining their pocket with free public money. The other side of the coin though is that what are – theoretically at least – democratic state institutions will have even less say in what and who urban regeneration is actually for.

What’s clear from the council’s regeneration priorities, the supposed end of gap funding and the talk at MIPIM is that the housing market is dead for the time being. Developers and property owners aren’t exactly known for their generosity. Without public subsidy in a stagnant market, there’s no money in affordable housing, let alone social or council housing. Property may still be the only game in town, but now it’s commercial property.

Research carried out by global real estate advisor DTZ suggests Manchester is currently the “stand-out UK region for commercial property investment opportunities”, and more recently found the city to be the third most expensive regional city for renting office space in the UK. Bernstein believes the future is in “science and technology”, and sees investment targeted at viable commercial projects in the hope that returns may then by pumped into yet unnamed future schemes.

The council’s Revenue Budget explicitly says the authority’s priorities in East Manchester lie in Eastlands and Central Park – and elsewhere in Airport City (the new Enterprise Zone) and the Oxford Road Corridor. The development of the 92 acre business centre, Central Park, together with the extension of Metrolink is aimed to integrate East Manchester with the city centre – the ultimate and unmet aim of New East Manchester. Central Park is billed as a place for attracting private sector growth for highly skilled workers, most likely to be drawn from the city’s pool of university graduates and from outside.

The Council Executive meeting on March 16 unanimously voted to move forward with the Eastlands Regeneration Framework. That document reveals the overwhelmingly commercial nature of the venture, aimed at turning the area into a ‘world class’ sport and leisure destination for residents and tourists. The prospective jobs then are likely to be significantly weighted towards retail and other service sector opportunities – low paid, highly flexible and insecure.

The decent jobs aren’t likely to go to residents of East Manchester. By and large residents in the deprived neighbourhoods of East Manchester don’t have the skills to work in the high-end business, science and technology or creative industries. 10 years of ‘regeneration’ in has barely made a dent in the cycles of poverty and deprivation to the east of the bustling city centre of commerce and expensive apartments.

The report does emphasise how community access to sports and leisure facilities is integral to the redevelopment. While this is a laudable aim, it comes alongside the likely closure of Sure Start services, youth centres, libraries and swimming pools.

Coupled with a welfare and benefit squeeze which is going to force people – literally in many cases – into low paid, long hour work to cover the basics, this is apparently how “East Manchester and its residents can make a more effective contribution to the economy of the wider city region” and how the council’s pet hate of ‘worklessness’ can be tackled. Under a regime where private enterprise growth is everything and profit is the only goal, it looks like the people of East Manchester are going to get screwed all over again.